Parks' Fly Shop is a small, very "old-school" shop located in an old building in a fairly old town. As such we aren't fancy looking, we don't have huge racks of clothes (though we do have some), we tend to cram the merchandise in as tight as we can, and to be frank it'd be nice if we had the money to fix up the old place, though we'll keep the vintage-1920s cash register until you pry it from our cold dead hands or offer us lots of money for it. That said, what we do have are a staff with fanatical devotion to the Yellowstone region, expert knowledge of it both in terms of fishing and in regards to everything else, and a fly selection that's bigger than it looks, with no filler since we don't carry anything for tarpon or other fish that aren't anywhere in the vicinity. It's also a fly selection that fights well above its weight class, since we tie and/or designed about half the inventory specifically for the waters where we guide and fish. We carry all the products you need to go fishing, plus a few things like hats and fleeces to remember us by.

Merton Parks, the founder of Parks' Fly Shop, taught himself to tie flies during World War II when commercial flies were largely unavailable. After the war he found that he had a lot of new fishing "buddies," most of whom were out of the fly required at the time. Sick of his fishing companions bumming freebies, Merton ran off a price list and started selling flies instead of giving them all away. By 1949, this business had expanded into a small mail-order catalog of flies and materials.

Merton was increasingly dissatisfied with his junior executive position with the Northwest Paper Company in Cloquet, Minnesota in comparison to the business he was running out of his basement. In the meantime the family had taken two vacations to Yellowstone Park, in 1947 and 1950, and became enchanted with the west. A Colorado vacation in 1952 was explicitly a scouting expedition to go into the business full time. At the same time Dan Bailey, owner of the famous shop in Livingston, was branching into the wholesale business and invited Merton to come out and scout locations in southwest Montana around Yellowstone. This trip turned up an available store front in Gardiner, Montana, so in April of 1953 the family pulled up stakes and moved to open Parks' Fly Shop. The shop has occupied three different locations in Gardiner since 1953, finally moving into its present building in the early 1960s.

After Merton died in early 1970, operation of the shop passed to his widow Ellen and oldest son Richard, who had just returned from three years in the army, including a tour in Vietnam. Eventually Richard took over completely, though Ellen continued to tie flies commercially and worked part time in the shop until just before her death in 2000. Richard continues to run the shop to this day.

From the beginning the shop specialized in custom flies. Guiding became a component of the business in 1954, after Merton put in 200 days on the water during the 1953 season in order to learn the area (a nice form of on-the-job training). Richard grew up in the shop, becoming a commercial fly tier at age twelve and a full fledged guide at eighteen. A family business during the early years, the shop's staff began to expand during the 1970s and 80s, and especially since the turn of the millennium.

Since 2001, the business has grown dramatically, buoyed by a three-fold increase in the guide service, increasing winter ski and snowshoe rentals, and a return to tying many of our own fly patterns rather than relying on commercially-available patterns as most shops do nowadays. 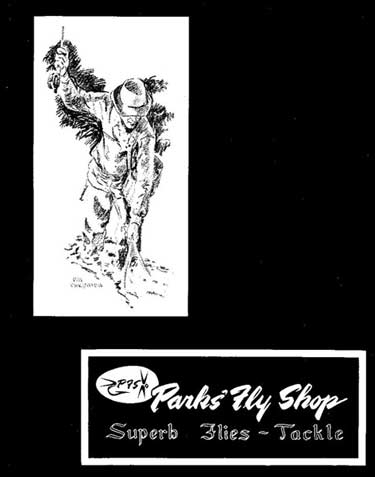