Parks' Fly Shop is a small shop with a small staff. In fact, we have only five full-time staff members in the summer (only two in the winter!) and use only three contract guides and outfitters regularly. With the exception of first-year employees, if we happen to have any, all of us guide and all of us work in the shop, to one degree or another, so you can be sure when visiting the shop that the clerk who is selling you flies has been on the water recently and knows exactly where and what the fish are eating.

Looking to book a guided trip and hoping to book somebody in particular? This is no problem, whether you've fished with one of our guides before and would like to do so again or because you think you'd be a good fit. Please contact the shop directly rather than contacting the guide. You can use our Guided Trip Information Form, give us a call, or e-mail Walter to start the booking process. You can request a specific guide when you book.

Staff photos and bios are below, based in order of seniority. Some of the following individuals are full-timers, some are independent contractors who have guided for the shop for a long time. All are full-time in the fly fishing industry at least during the June-October high season. 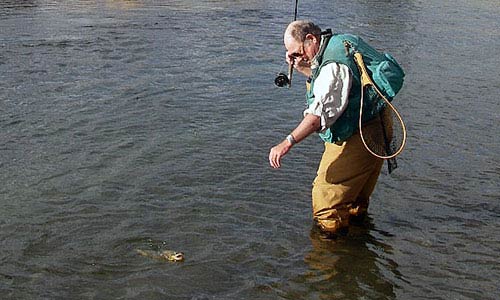 Richard Parks is the owner and shop manager at Parks' Fly Shop, and still runs a few guide trips as well. Richard was born in northern Minnesota, and his first exposure to fly fishing was on the streams that flow into the north shore of Lake Superior. Family vacations to Yellowstone in 1947 and 1950 were followed by the move to Gardiner when his father opened the Parks' Fly Shop in 1953. His father built him a fly rod when he was six but it took a few years for Richard to grow into the rod. By age twelve Richard was fishing dry flies as well as tying for the shop and working part-time as a clerk. During his teens this gradually shifted into a full-time summer job.

During this time, Richard continued to develop his skills both by himself and with his father. Richard began guiding in 1961 and continued to guide and work in the shop through his college years. After graduating with a History degree, Richard served a three year hitch in the US Army, including a tour in Vietnam. When his father died in the spring of 1970 he took over active management of the shop with the help of his mother. He co-authored his first book, Tying and Fishing the West’s Best Dry Flies in 1978 and published his second, Fishing Yellowstone National Park, published in 1998. Two subsequent editions of the latter book have followed.

Following the lead of his father (who had been a founding member of Trout Unlimited in Montana), Richard expanded his involvement as a conservation activist throughout the 1970s and 80s. During the early 1990s he served as Chairman of the Northern Plains Resource Council, one of Montana's leading conservation organizations, and served twice as Chairman of the Western Organization of Resource Councils. He was also a founding member of the Fishing Outfitters Association of Montana and has served as President of that organization.

In 2003 Richard met Nancy Rourke. In 2004 he bought a house in Gardiner which he and Nancy, soon to be his wife, converted to a bed & breakfast, the Gardiner Guesthouse, which opened in 2005.

Walter with an Alaska rainbow.

Walter Wiese is the shop's #2 outfitter, primary guided trip contact, web and social media manager, and coordinates the fly selection. He ties most of the shop's custom and local fly patterns. Walter has been working for Parks' Fly Shop since 2001. A US Coast Guard-licensed captain, Walter now lives in the "Creek House" in Livingston, Montana, with his wife Jani, and runs his own business Yellowstone Country Fly Fishing. He seldom works in the front of the shop these days, but is active behind the scenes.

Walter grew up in Missouri, where he began fly fishing at age six or seven, in the mid-1980s. Most of his early experience was spent on the spring creeks and tailwaters in the Ozarks. He began fishing the Yellowstone area on a family trip in 1993. He has been tying flies since 1992 and is now a contract fly designer for Catch Fly Fishing. He started writing about fishing professionally in 1999 and has sold stories to American Angler, Fly Tyer, Fly Rod & Reel, and numerous other magazines. He has written three books about fly fishing, Yellowstone Country Flies: The Fly Patterns of Parks' Fly Shop, River Characters: Deep Thoughts and Shallow Stories About Fly Fishing, and Fly Fishing Yellowstone Country: A Basic Guide to Fly Fishing Yellowstone Park and Southern Montana, and made contributions to several other books.

Walter runs both wade and boat trips for the shop, on all waters on which we guide. His favorite walk/wade locations include the Black and Grand Canyons of the Yellowstone, the Gardner River, and rugged portions of Slough Creek. His favorite float trip waters are the Yellowstone in Yankee Jim Canyon and far east of Livingston, the lower Stillwater River, and the Boulder River. He also runs jet boat trips all season on the Missouri River near Helena. 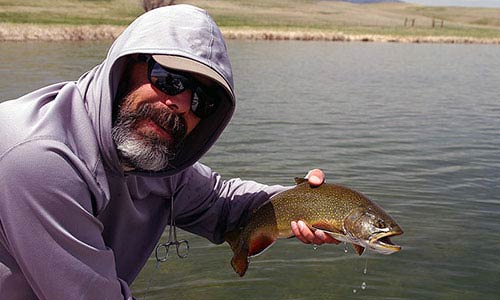 Rob Olson grew up in the Midwest with the majority of his early fishing time spent in the Western Upper Peninsula of Michigan chasing bass, pike, and panfish. Once exposed to the wilds of the Greater Yellowstone region and steep slopes in the surrounding mountain ranges, Rob arduously focused on an education, cramming a four year degree into six years of classes with daily trips to the rivers and peaks. Rob began guiding anglers with a couple seasons based out of West Yellowstone, followed by several years working as an independent guide and outfitter in the Madison and Yellowstone drainages.

Now based in Livingston, Montana, Rob primarily focuses on the Yellowstone watershed, both inside and outside Yellowstone National Park. He also does an occasional Madison River trip for PFS. He began guiding for us in 2006. In addition to his work in the Yellowstone area, Rob is working to expand his guiding to the Western Upper Peninsula of Michigan during the Montana offseason, where he pursues Great Lakes steelhead and legendary 'coaster' brook trout along with pike, muskie, bass and salmon.

In the winter, Rob is involved in professional rescue and avalanche mitigation work with the Bridger Bowl Ski Patrol and the associated Gallatin County high-angle search & rescue team. 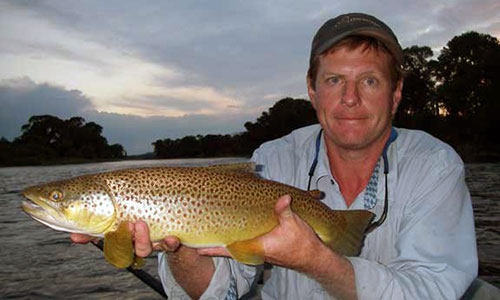 Don grew up in Pennsylvania and was introduced to fly fishing at a very young age through “The Brother Hood of the Jungle Cock”. Don has been guiding in this area since 2002. When he is not on or in the water he loves to float high in the Montana sky in his hang glider. 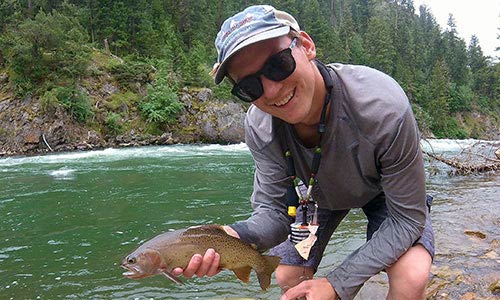 Trevor with a Yellowstone River cutthroat.

Trevor joined Parks' Fly Shop as a shop clerk in 2017. He began guiding in 2018. Trevor grew up in southwest Montana, where he primarily fished hardware on Georgetown Lake. He was bit by the fly fishing bug about the time he finished high school. Since moving to Gardiner at 19, he has been fly fishing local waters almost every day from spring through fall. He has also spent a lot of time in Grand Teton National Park, and is definitely our staff expert on fishing down there. Trevor spends his winters working at ski resorts, whether building terrain parks for tricksters or just working as a lift operator. When the snow melts, he fishes, and he's spent a great deal of time fishing top-tier waters near many famous ski resorts in California, Nevada, and Colorado in addition to the Yellowstone and Grand Teton region.

Trevor's favorite waters are the rough and tumble sections of the Gardner River, the Lamar, the Black Canyon of the Yellowstone, and a small tributary creek to one of the above that shall remain nameless on the Internet. Of all our staff, Trevor is definitely the streamer junkie. He's a big fan of swinging big, articulated, contemporary streamers on the Yellowstone, both in Yankee Jim Canyon and down in Paradise Valley. 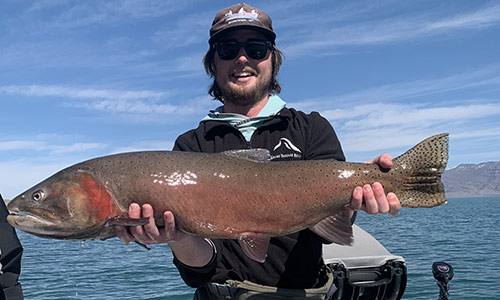 Kody was born in Colorado, but grew up mainly fishing southern California chasing yellowfin tuna and dorado doing multi-day deep sea trips out of Dana Point. Once finished with college he moved back to the Colorado high country and immediately turned to trout where he fell in love with the diverse headwater streams and tailwater options on the South Platte, Blue, and Arkansas Rivers.

Since he began fly fishing, he has spent 100+ days on the water each year in all four seasons trying to make up for lost time. Since beginning fly fishing Kody has made annual multi-week trips to the Teton-Yellowstone area to enjoy salmonfly season as well as some of the more technical fisheries in the area. Kody also enjoys the art of fly tying. He began tying in 2016 and has been consistently progressing since.

When Kody isn't fishing the Yellowstone, Slough, or Soda Butte you may find him hunting the local units in fall, or fishing the salt and cross country skiing through winter. 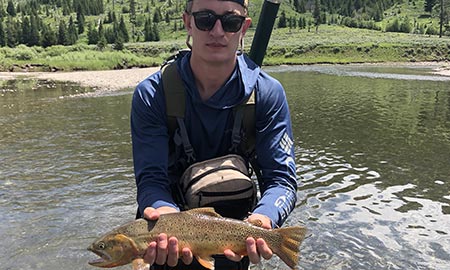 Clancy with a Slough Creek cutthroat.

Clancy Thomas joined Parks' Fly Shop's staff as a shop clerk for the 2020 season. He'll be guiding walk-wade trips in 2021.

He enjoys throwing big articulated streamers in search of large brown trout. One of his favorite things about big streamers is the process of designing and tying them.

Clancy attends Montana State University where he pursues trout in the Gallatin, Madison, Missouri, and Yellowstone Rivers. When he isn't on the water, he can be found skiing, kayaking, or climbing in the Bozeman area. 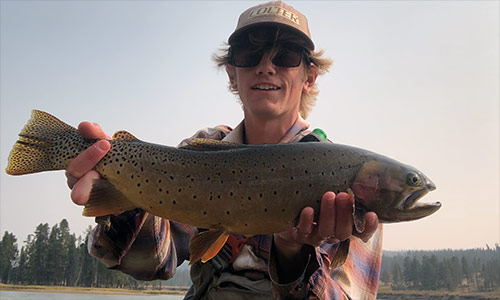 Nate with an upper Yellowstone cutthroat.

Nate is joining PFS for the 2022 season as a shop clerk and trainee guide.

Nate grew up in Western Massachusetts, where he got into bass fishing at a young age. He competed in tournaments throughout middle and high school on lakes including Lake Champlain and Kentucky Lake, and qualified for high school nationals three times during those years. He picked up fly fishing when he was in 5th grade but it didn’t take his focus away from bass fishing until he was 15 or 16.

Nate worked as a bass fishing guide as well as a fly fishing guide during the summers while he was in high school, and some of his favorite species to catch on the fly in his local rivers included trout, pike, carp and smallmouth bass. In 2019 Nate began college at Montana State University where he has been able to explore many of the rivers of southwest Montana.

Nate fishes year round and likes figuring out challenges that are presented by the different seasons. His favorite type of fishing is head hunting for selective trout, because that is what he grew up doing on rivers like the Delaware River. Nate’s other hobbies include snowboarding and rock climbing but those are often overlooked if the weather is shaping up to be a good day on the water. 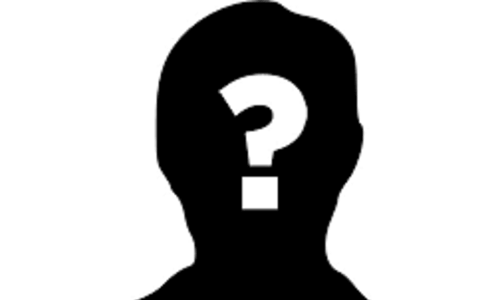 In addition to our in-house staff and the contractors we turn to the most, we also use three or four other local independent guides for a few trips per season. As with all of our guides, anyone we pair you with will be a professional guide who has been fly fishing the Yellowstone River and Yellowstone National Park for many years. Since many of our "a few trips for Parks' per year" guides live in Bozeman or Livingston, Montana, if you happen to be staying in one of these cities, we may pair you with one of these guys and just have you meet them there.