Parks' Fly Shop runs trips on three area private ranch lakes, on two properties. These trips are primarily float trips, with most fishing done from our drift boats, but there are also some opportunities for fishing from shore as well. The breakdown between walking and floating depends on weather and water conditions and the tactics the fish are demanding.

Lake trips offer our clients several advantages. First, they offer visitors extremely consistent fishing for large trout. Fish over eighteen inches are common on all lakes. With the exception of those from Lower Story Lake, most fish caught on our lake trips exceed 1.5 pounds, and many will crack three. Second, the lakes we guide on are usually at their best in the spring and fall, when the Yellowstone River is out of play due to spring runoff or can be inconsistent as water temperatures drop. There are also two downsides. First, the lakes where we run float trips are private, with access fees ranging from $80 to $100 per angler per day. Second, availability is quite limited. One of the lakes we fish has a capacity of only one boat, for example. Basically, it comes down to increased cost in return for increased fish size and decreased competition from other anglers.

Our rates for private lake trips do not include the access fees charged by the landowners (usually called rod fees). When we make reservations with the lakes on your behalf, these fees will be charged along with your deposit to the shop.

Lake trips will usually meet at between 7:00 and 8:00 in the morning. Most lake trips will not meet at our shop, since the guides we use for these trips are based closer to the lakes than the shop is. You will instead meet your guide at or near Emigrant or Livingston, Montana, depending on the lake and your own lodging location.

Lake trips are ideal for any anglers who want to fish from a boat when the Yellowstone is in runoff, for anglers who don't want the fast-paced trip of a river float but nevertheless prefer to be in a boat, for anglers with limited mobility, for less-experienced anglers who don't want to take a walk trip, for those who want to ensure limited competition from other anglers, for anyone coming between mid-April and early July or after September 1, and for anyone who wants to target large fish.

Please note that availability for lake trips is quite limited, both because these waters are private and only allow a few anglers each day, including anglers booked with guide services besides our own, and because only two of our full time staff work on the lakes. Trips can usually be arranged on short notice prior to mid-June and in October, but for trips at other times, we suggest booking as soon as possible to ensure we can make a reservation on your behalf at the lake of your choice.

The Story Lakes are probably the best all-around value in area private lakes. There are two lakes, the upper of seven acres and the lower which is a bit smaller. Both lakes are situated in beautiful "old" agricultural country in Paradise Valley, about thirty miles from Gardiner.

The upper lake is generally the better of the two. It holds rainbow and brook trout, and once in a great while a brown. This is our favorite lake for pulling the boat to the side and walking the banks, which are mostly relatively flat and open. This allows us to sight-fish for fish cruising the weed edges. Small, flashy nymphs are usually the ticket for this technique, but there are also appreciable numbers of Callibaetis mayflies which can get the fish rising in May, June, and September, and early and late in the year this lake's fish are suckers for big leeches. If the fish aren't crusing shallow, aren't rising, and aren't eating leeches, we usually fish deep with chironomid imitations. The brook trout are worth noting here. The last few seasons, this lake has been turning out a lot of 14 to 18" brookies, which are gigantic for the species. The rainbows averaged in the same range for the past few seasons, but they can reach 24 inches. 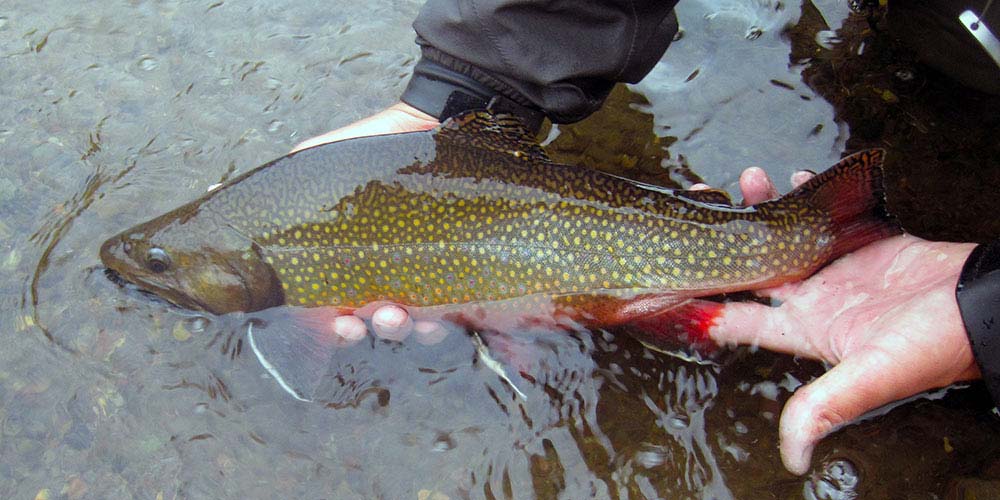 The lower lake holds rainbow and brook trout, and once in a blue moon a cutthroat. Since 2012, rainbows have predominated. The brookies average 12-14 inches, while the rainbows average 12-16 inches, though some seasons we'll see an occasional fish over 20 inches. This lake does not present as many opportunities for dry fly fishing or sight-fishing from shore as the upper lake, but it is not as badly impacted by wind, which makes it a better choice for beginners than the upper lake. Chironomids work great here, while at times the fish strongly prefer small Woolly Buggers and leeches.

Rod fees for the Story Lakes are $80 per angler/day. This fee applies to both lakes, so as long as the lakes are not fully booked, it's possible to jump from the upper lake to the lower lake if the wind kicks up. Four rods (two boats) are allowed on the upper lake, while only two rods (one boat) are allowed on the lower lake, so availability can be quite limited, especially in June when traffic really increases. We primarily fish the Story Lakes from mid-April through mid-June and again in October. In general, when you book a Story Lake trip you should expect to meet your guide near Emigrant, Montana (halfway between Gardiner and Livingston, more or less), rather than in Gardiner.

Burns Lake is a 25-acre lake located near Big Timber, MT. It enjoys the strongest spring water component of any of the lakes we fish, which mean it has the strongest insect populations and water that stays cold enough for good fishing until later in the summer than the other lakes where we guide. This is the lake you want to fish if you want a reasonably solid chance of catching some big stillwater trout on dry flies, and it's a great place if you want to use a variety of techniques.

This big fish ate a leech fished from shore.

Burns is home to an eclectic mix of trout, including rainbows, browns, cutthroats, and brook trout. Rainbow and brook trout predominate. The average fish size here is 14-18 inches, but this is a bit misleading because the range of fish is much broader here than elsewhere; there are 10" brook trout, 20" rainbows, and maybe even a few 30" browns. Rest assured that you'll see plenty of fish over 18 inches on a good day.

In May and June, chironomids and leeches are the top producers, while larger streamers and crayfish imitations can also work. On warm, calm days, the shallow flats on the lake's western side offer great dry fly fishing, especially when Callibaetis mayflies or damselfies are hatching. Chances for hatches continue through June and into July, and the possibility of catching fish on ants, beetles, and even hoppers increases as summer progresses. August is really the only month when Burns is typically too warm to fish well, and we avoid it at this time. In the fall, streamers and leeches are the top bets, but since this lake is in low-elevation ranch country, hoppers can work until well into October.

The rod fee on Burns is $100 per angler/day, and we regularly guide on it in May, June, July, September, and October. Because it is located east of Livingston, Montana, you should expect to meet your guide (Walter or Rob, most likely) in Livingston. You'll then travel with the guide to the lake.

Spencer C. sight-cast to this fish using a tiny midge pupa. We swear adults can catch fish on Burns Lake, too... Photo by Brian W.

Text, graphics, and logos copyright Parks' Fly Shop. Photos copyright Walter J. Wiese or the photographer. If you would like to use any of the content on this site for noncommercial purposes, you are welcome to do so provided you include this copyright notice and our contact information. Please do not use the information here for commercial purposes without written permission.